Niece of Sgt. William Charles Bradley, US Army Missing in Action since Dec. 1, 1950 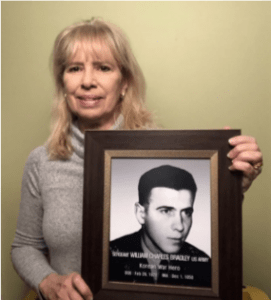 Robin’s uncle, Sergeant William C. Bradley, became missing in action during the Korean War on December 1, 1950, and his remains still have not been found. Shortly after that, he was captured during battle and died en route to a Prisoner of War camp in North Korea.

She knows first-hand the pain and heartbreak of not having him home with a place to memorialize him. She became a member of the Coalition of Families of Korean and Cold War POW/MIA’s with hopes of helping other family of the Missing and finding more information about her uncle. Robin was soon elected as President of the Coalition of Families and served from 2003 to 2009. Her involvement in this leadership role included speaking for the concerns of the families across Pennsylvania, being interviewed by various news agencies here and abroad, testifying before Congress on the need to continue providing funding to find our missing, meeting with both the Russian representatives and Chinese Archivists, members of the Department of Defense, and initiating a Press Conference at the Pennsylvania State Capitol unveiling “The Pennsylvania Project,” to bring awareness of the need for family members to donate the much needed MT DNA for identification of our missing loved ones.

Robin Piacine also serves as Secretary of the local Korean War Veterans Association, Plateau Chapter #297. She is part of the Tell America Project in Crossville, visiting students in local high schools with the Korean War Veterans who share their stories. She is also involved in the KWVA Scholarship Program, which awards scholarships to well-deserving students in the area. She also serves as co-chair of the Veterans Mission Outreach Program at Crossville United Methodist Church with her husband, COL Frank Piscine, US Army (Retired.)

She was also involved in local POW/MIA vigils. She held the only single-person chair of the 50th Commemoration of the Korean War bringing in speakers from the Department of Defense to speak to local events and reach out to the classrooms regarding the history of the Korean War.

Thoughts on the Wall of Remembrance

Robin Piacine describes the Wall of Remembrance at the Korean War Veterans Memorial as a “priceless gift.”

“I say this because my uncle’s remains are still in North Korea, and the exact location isn’t known at this time; I, along with my siblings, don’t have a place to pay honor to him, to visit him, to tell stories to him or to grieve for him,”

“The Wall of Remembrance will be such a hallowed place, a priceless gift, and very personal to me. I envision gently tracing the letters of his name, realizing that this may be the closest I’ll ever get to him.”