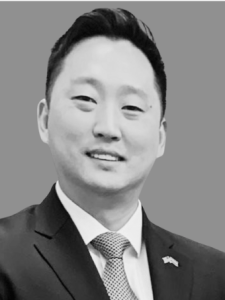 Mr. Larry “Lee” Hencshel is the Director of International – 5G for the Office of the Secretary of Defense (OSD) and Office of the Under Secretary for Research and Engineering (OUSD R&E) at the Pentagon. Before his current position, he served in several different agencies within the Department of Defense (NSA, DIA, OUSDI), the Department of Homeland Security (NCCIC & CISA), and a service member in the United States Air Force. Mr. Hencshel has a multitude of experiences in communications, policy, planning, international coordination/engagements, collection, analysis, processing, and dissemination of technical intelligence and program management in operations relating to Intelligence, Cyber, and 5G.
Since 2012, Mr. Hencshel has volunteered in several nonprofits across Washington DC, Virginia, and Maryland. He currently serves in three nonprofits as a senior advisor and speaker/instructor in enhancing youth education, high school, and college students’ professional development, cybersecurity training, and workforce development. Mr. Hencshel provides over ten large-scale seminars a year (free to the public) to support these important areas of study. Mr. Hencshel engages with international partners, political figures, and community leaders through these nonprofits. Mr. Hencshel also serves on the Board of Directors of the Howard County Economic Development Authority (MD), overseeing the economic and infrastructure development of the county.
While volunteering in these critical community efforts, he is also a mentor and head coach for the Taekwondo team at the University of Maryland Baltimore County, Johns Hopkins University, and the United States Naval Academy. While working with several hundred high school and college students per year, he provides guidance and mentorship to students who want to serve in the U.S. Military or the U.S. Government. Mr. Hencshel is responsible for sending over 200 students to the military academies, military service, government service, and corporate industry, focusing on the professional field of intelligence, cybersecurity, policy, and information technology. During major events in the Washington metropolitan area, Mr. Hencshel volunteers as Master of Ceremonies to support ongoing efforts and initiatives.
Mr. Hencshel holds a Bachelor of Science, a Master of Science, a Master of Business Administration from the University of Maryland University College. He is currently pursuing his Doctorate in Global Security at American Public University.