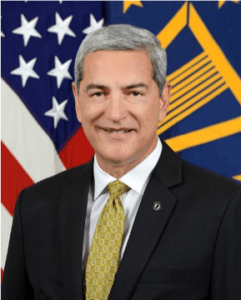 Mr. Kelly McKeague began service as the Director of the Defense POW/MIA Accounting Agency (DPAA) on September 5, 2017.  He is responsible for policy, control, and oversight of all aspects of the Department’s program to account for DoD’s missing personnel from past conflicts.  He leads DoD’s worldwide enterprise of research, investigation, recovery, identification operations, and supporting functions to provide the fullest possible accounting of our missing personnel to their families and the nation.

Before his appointment, Mr. McKeague owned and operated a consulting business in Alexandria, Virginia, providing strategic and operational consulting to small-capital corporations seeking to expand business lines and services.

In December 2015, Mr. McKeague culminated a 34-year career in the U.S. Air Force, retiring as a major general.  In his last two assignments, he served as the first Deputy Director of the newly established DPAA and as Commander, Joint POW/MIA Accounting Command at Joint Base Pearl Harbor-Hickam, Hawaii.

He earned numerous awards and decorations commensurate with his distinguished military service.