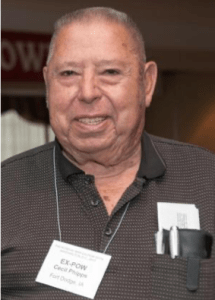 Mr. Cecil Phipps was born on May 20, 1930, in Fort Dodge, Iowa.  He enlisted in the US Army in 1950. He attended basic training at Fort Riley, Kansas, before being sent to Okinawa, Japan.  A month later, the Korean War broke out, and he arrived in Korea on August 1, 1950, on a Japanese fishing boat.

Mr. Phipps fought on the front lines from Pusan Perimeter up into North Korea from August 1950 through November 1950. After being separated from his unit during combat, he was captured as a POW by Chinese communist soldiers on November 28, 1951. He was marched along with other POWs for a week and taken to China, and then marched again and held as a prisoner of war in North Korea at Pyok Tong camp and Camp #3, near the Chinese border.

After being in captivity for 33 months, he was released on August 28, 1953. Mr. Phipps says that it was the most wonderful feeling to be finally free, as he was being flown on a helicopter from Panmunjom to Inchon to board a ship to come home. After the war, he got married and raised a family in Iowa. For over 25 years, he continued to suffer recurring nightmares of his experiences as a prisoner of war and couldn’t talk about his experiences. When he started attending the Korean War Ex-POW Association meetings, he was able to start talking about his experiences finally. He has been a member of the Korean War Ex-POW Association for over 20 years and has spoken extensively about his Korean War and prisoner of war experiences.

In 2016, Mr. Phipps visited South Korea and was surprised at their progress. He says of his service in the Korean War, “It was worth it.  They are very thankful for their freedoms. They were very appreciative we were there.”

Mr. Phipps says that we should all remember that Freedom is NOT free and that so much sacrifice was made to defend South Korea and the freedoms of its people.

Regarding the Wall of Remembrance Dedication, he says, “I appreciate that the fallen heroes will be remembered. They are the real heroes.”