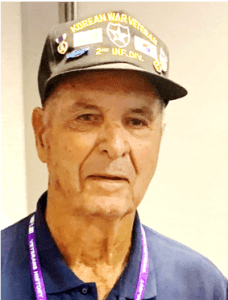 Mr. George Sousa was born in Point Loma, California, near San Diego. His parents had immigrated from Portugal. He grew up in San Diego and had graduated from Point Loma High School, and was working with his father in their family fishing business when he was drafted into the US Army in February 1951 —he was 20 years old when he joined; he got married just before heading to Korea.

He left for Korea in April 1951 and was immediately taken to the front lines of fighting in the Punchbowl area. He then continued fighting in combat in the Battle of Bloody Ridge and then on to the Battle of Heartbreak Ridge. On September 13, 1951, at Heartbreak Ridge, an enemy tank fired upon their unit, killing everyone in Corporal Sousa’s unit, including 3 of his closest buddies. One of those killed was his foxhole buddy, Private First Class JC Coffey. PFC Coffey had lied about his age and enlisted when he was only 16 years old and was killed at 18 years of age. Along with PFC JC Coffey, another buddy named PFC Edwin William Ciesielski was also killed. The third friend killed that day was a young 16-year-old Korean orphan boy who had become a houseboy and helped carry ammunition for their squad.

Mr. Sousa was evacuated for medical treatment to Japan for shrapnel wounds to his stomach and, after a few weeks of recovery, went back to the front lines of combat and continued to fight in Korea. He continued to fight in the front lines of combat until March 1952. On the Thanksgiving of 1952, shortly after his return home from Korea, his family was featured on the front page of The San Diego Union-Tribune, showing him celebrating with his young family. He says, “I’m just one of many veterans, and I thank God that the Lord brought me back home in one piece.”

In 2012, 60 years after he left the battlefields of Korea, he and a group of veterans from the 2nd Infantry Division Association went back to South Korea. Mr. Sousa says, “when I looked at Seoul, it was breathtaking! I could not believe how built-up Korea was and how they worked so hard to rebuild their country. It gave me a feeling of satisfaction that we helped to keep South Korea free. It makes me feel very good about it. So glad to see them flourish. I’m very happy for them. I would do it again if I had to. I was very proud to serve.”

Mr. Sousa says he keeps a photo of his friend, Private First Class JC Coffey, on his desk in his home. “He gave his life for his country. I think of him every day and salute him every day.”

Mr. Sousa says that this Wall of Remembrance is so important and sacred because it honors his brothers.  “They were close to my heart, close buddies, like brothers. I would have gone to hell and back with them. The Wall of Remembrance means the world to me because my friends and others who were lost there can be remembered.”

He says, “It was an honor to serve his country and fight for freedom and liberty.”